a fishy story & an upcycled bathrobe.

Morning folks!  Hope you have all had a brilliant weekend...ours has been quiet and homey...except for 'dh', he went fishing on a yak in the Huon for two WHOLE days.....lucky for us he did land a very nice Searun Trout, which we had for Sunday dinner.  Not only did he catch the fish, he cooked it for us as well...and very tasty it was stuffed with fennel and lemon.

so here are some pretty pics from his trip....along the Huon River...... 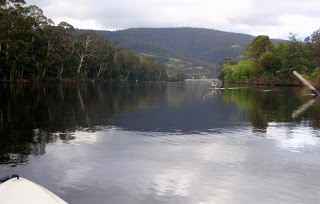 from 'dh's' kayak near Huonville 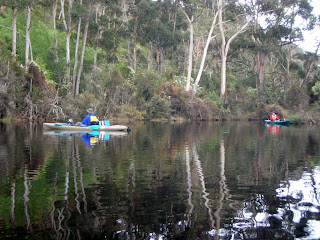 Who would ever know lurking under these pretty relective waters, lie millions of whitebait...?

answer:  'when he catches our dinner, dear.'

here is a little story of how a traditional innocent blue stripey cotton Japanese bathrobe, made it's way from a ryokan somewhere in Japan....

and landed in a Japanese shop at Kingston Beach, called Wafu Works,
then ended up in my eager hands,

to be transformed from an ugly duckly into a swan (ok..maybe that was overkill)...

any way it now floats in the breeze,
flipping and flapping this-a-way and that.....
because now you may call it '17 flag bunting'. 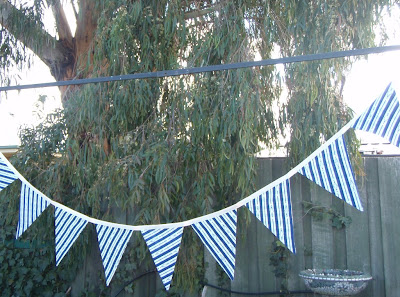 I made it for our garden at home....but was so pleased with how it turned out, I popped it in the store....I have another one left, lucky I bought two eh?  Over 4 metres in length, not too bad for one kimono bathrobe.