Happy Monday dear readers - I hope you all had a restful weekend...it's only going to get crazier you know?
I thought it was time I gave a short update on how things are progressing thus far in the 'challenge of the utmost kind'....

Everything was going along grandly, until one day I realised that I had accidentally thrown out my tea-strainer, nothing too earth shattering here, however after countless visits to op shops, and still forgetting to be on the lookout for a suitable replacement,

I simply went out and bought one 'new'.

Easy, fixed my messy tea making, and bob's your uncle.  However, I am feeling a tad guilty about this.  My hubbie tells me nicely 'to get over it', it cost a couple of bucks for goodness sakes, and yet I can't...so hence my confession.

It kindof feels like I sneaked a bit of chocolate, and because it was little, it doesn't count....

and everyone knows even SMALL pieces of chocolate count.

Then, came the iron incident just a couple of days later....

Tripping over the cord, my poor faithful servant of many years fell flat on the floor, and despite efforts from hubbie to re-plate, she was well and truly broken on the inside.
No humpty dumpty irony fix here.

(made a great show and tell item, for mr 'd' at school, however)

Unbelievably, after Little Jenny Wren's  iron gave up too, soon after she commenced
'the challenge', I remember saying distincitively that an iron would be considered a

'tool of the trade'

for me, therefore "a personal exception to the NO buy new rule" and if by chance the same fate would happen to me, I would simply buy another one.

So, despite some minor hiccups,

most of the weekend has been spent trying to spring clean of sorts,

well, ok yes, it's a little late for spring cleaning,

and I'm hardly beating mattresses in the midday sun,

and dusting the ceiling.

It's more of a de-cluter, de-mess.

In the process, I have discovered in years past
I have bought 'thrift', and 'hand-made'
in a big way.

It's not a habit I'm unfamiliar with, so the challenge for me is
more to do with quitting the 'buying new',
rather than establishing a rapport with op shops.

whereby if I bring something into the house,

it means that something else needs to leave.


It's a way of telling myself what possessions are really necessary.

I also spent some time over the weekend delving into my borrowed book collection, and author Anthea Turner' of  'How to be the Perfect Housewife',
(I tried not to let the title affect my ability to glean some wise words!), advises that we should only have in our home;

that which is beautiful,

that which is useful,

that which is seriously sentimental.

I agreed with her on that, but I didn't agree with her statement that making home-made pasta is a waste of time. 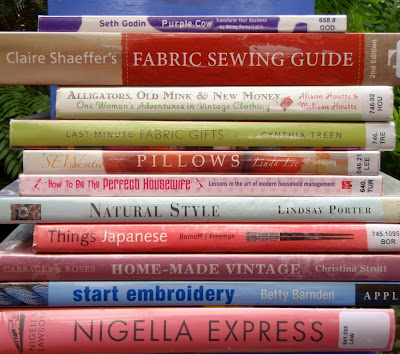