food as theatre - the sound of the sea?

As some of you may know, I have been watching MasterChef (Australia).  I'm a big fan. I think it goes a long way to educating the public to a 'cooking from scratch' philosophy, encouraging sourcing good produce, and I've heard stories of people expanding their palettes and minds.  People eat too much crappity crap these days.
In days gone by, I used to do night fill for a supermarket, and baulked at stocking the 'nutritous snacks' isle with sugar, and wheat laden bars.
I'm not crazy about the amount of butter/duck fat that is often used in Masterchef, but there is still a greater purpose in all of it.  You can get people, who are not slightly interested in cooking, to become enthused about cooking for their family.  Brilliant.  My son is keen to try some new things, that he may not have before.  (he's also a fan!)
Last night I was completely mesmerized, and horrified, and again entertained, when Heston Blumenthal from the Fat Duck (a three Michelin star restaurant), presented 4 of his signatures dishes for the contestants to make.    This guy is clearly brilliant...part scientist / part magician, his chosen medium is food.

I want to open up a discussion. Do you think that chefs are taking things a bit too far?

I mean, I understand the concept of going to a restaurant, and enjoying good food with good company.  It's one of the niceties of life.

But this truly extraordinary dish called 'Sound of the Sea', presented in Heston's restaurant with a giant conch shell, cleverly hiding an IPod, that enables you to enjoy seaside sounds, whilst eating the dish.
Is that crazy?  It's clever I know.  Is this too much?  Are we becoming so affluent, that we seek increasingly deeper experiences of sensuality.
It partly fascinates me, partly disgusts me.  Am I ranting and raving over nothing?  This dish took Heston four years to design.  He has seen people in his restaurant cry whilst enjoying it, savouring it.
When so many people in the world don't even have clean water to drink, is this a form of gluttony for those that can afford the price asked for a dish such as this?  If I had enough money to fly over to England, and dine at the Fat Duck, would I?   A three course menu at the Fat Duck is 150 pounds.  In Australian dollars that equals $252.  Wow.   That's a lot of moola any way you look at it.  For one meal. 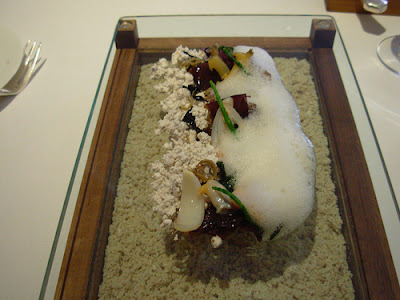 Sound of the Sea, on the menu of the three-Michelin-starred Fat Duck restaurant, features seafood and edible seaweed on a bed of sand-like tapioca - all washed down with the sound of breaking waves
These quotes taken from BBC news:
'Chef Heston Blumenthal, famous for his scientific approach to food, said the recording of breaking waves heightened the flavour of dish "Sound of the Sea".

"We ate an oyster while listening to the sea and it tasted stronger and saltier", Mr Blumenthal said.
Mr Blumenthal told Square Meal magazine that the tests carried out with Charles Spence at Oxford University "revealed that sound can really enhance the sense of taste".

George Calombaris (actually I'm a big fan of George!) from Masterchef and owner of the Press Club in Melbourne, has this amazing dessert on his menu called 'Aphrodite', that has white chocolate mousse, cherries, roses, soil, scent for only $18.90.
It comes with a beautiful tray of 'soil' (served separately of course) that the waiter presumably 'tips' scent of rose over, or something like, thus releasing perfume and earthiness that matches the flavour of the dessert.
Again, engages the senses. 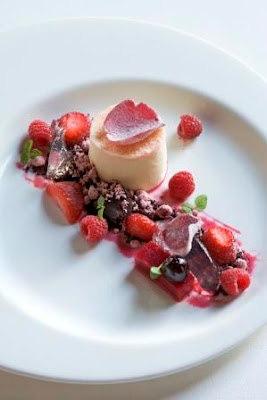 Aphrodite
There must be countless other chefs that procure such food theatre.
Is it all relative?
Should I feel guilty about dining out at all, when others can't?
What do you think about all this food theatre business?
Is it acceptable?  Is it over the top?  Is it all relative to one's financial/social position?
Posted by Luisa at Tuesday, June 22, 2010